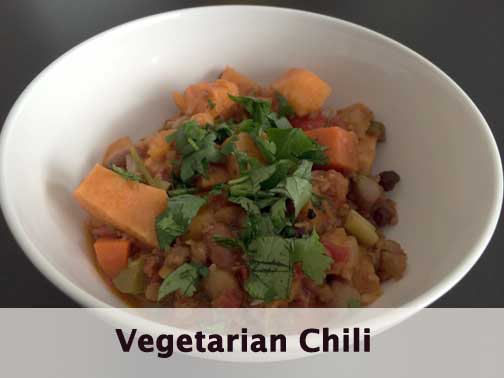 We had a chilli cookout at work and I tried this Jamie Oliver recipe. I know, I know, trying a new recipe for other people is a little bit dicy, but…. I ended up winning the awards for best and most creative chilli. Well this is now my second time making this. I think what makes this good is the sweet potatoes, the combination of sweet, spicy and salty. I hope you enjoy!

Peel the sweet potatoes and cut into bite-sized chunks. Sprinkle with a pinch each of cayenne, cumin and cinnamon, drizzle with olive oil and scatter with a pinch of salt and pepper. Toss to coat.

Put the tray of sweet potato in the hot oven to cook for 40 minutes until soft and golden.

Cooking in a slow cooker
Spray the sides of the slow cooker with cooking oil to prevent sticking.

Add the tinned tomatoes (with the juice),veggie meat. Mix in the coriander stalks, chilli and spices.

Turn the slow cooker on high for about 6 hours or on low of 10 hours. Sir every so often. If it gets a bit thick, add a splash of water.

Add the roasted sweet potato about an hour before it’s done in the slow cooker. Taste and season with sea salt and freshly ground black pepper, if needed. Take out the habenero before serving.